PhD-research reveals how to inhibit phage attack on cheese

Phd research reveals how to inhibit phage attack on cheese

Say hello to the virus that poses a financial threat for the dairy industry, but also can help us improve food safety. Bacteriophages, or phages for short, are virus that attack bacteria.

One type of bacteriophages attack Listeria, thereby contributing to safer food. Another type of phages, those who attack lactic acid bacteria, is a major headache for the dairy industry

It is the latter type of phages Hans Petter Kleppen studied during his PhD-research at the Norwegian University of Life Sciences (UMB). 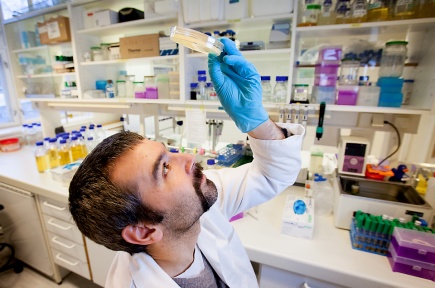 There are about one billion phages in one slice of cheese.

Phages are natural organisms in the biosphere, and are totally harmless for people. But sometimes they can harm the taste and consistence of cheese.

"In cheese production phages can cause the fermentation process to slow down, or in the worst case stop," said Kleppen.

People who work in cheese production will be familiar with the dread words, “the starter is going slow it must be a phage attack”

"Phages are considered the main cause for fermentation failure in the dairy industry, which can cause major financial losses," he explained.

Phages are species-specific, they kill strains or a subgroup of strains within the targeted bacterial species. The virus can contaminate via water drops or air. Where there is a lot of bacteria, phages tend to multiply quickly. Their mode of action is to inject their DNA into a living cell.

The phage then replicates itself and the cell then bursts releasing a number of phage, these then attack many other cells. The result is that the phage multiplies much more rapidly than the bacteria being attacked. The resultant impact on cheese making is that acid production capacity is greatly reduced. This can result in no acid production at all (a dead vat) or poor quality low acid cheese.

When producing cheese there is a massive growth in the number of lactic acid bacteria, and as a result the conditions are ripe for a quick and massive growth of phages.

"The fermentation processes are closely supervised through pH-measurements. Abnormal pH-development indicates that lactic acid bacteria do not behave as excepted. Often it means that they have been killed by phages," Kleppen.

Among other things, Kleppen has studied the most critical phases of the cheese fermentation process.

"The most vulnerable phase in the production, was in connection with cultivating so-called starter cultures. The tank with starter cultures, which is called a bulk starter vat or tank, is set up a day in advance, and provide the perfect breeding ground for phages. We discovered that phages are always present in the bulk starter tank, but that the number and diversity varies," said Kleppen.

In other words, the source of phage contamination in the bulk starter tank was found to be the dairy environment itself. This discovery made it easier to identify measures which can hamper or prevent phages from throwing a spanner in the works for cheese production.

"The dairy industry has long been aware that the bulk starter tank has to be supervised and protected. A range of measures may be applied, such as overpressure in the room where the tank is situated, separate ventilation, stringent hygiene and sterilisation measures, changing clothes and sluicing. Our research has showed that such measures also are important to prevent phage attacks," said Kleppen.

Background: Hans Petter Kleppen's PhD-research was a collaborative research project with  UMB, TINE and the Norwegian Research Council. The title of his PhD-thesis was "Studies on bacteriophages infecting lactic acid bacteria of industrial food fermentations"