Other donor countries are following Norway’s allocation of up to NOK 15 billion for efforts to reduce deforestation and forest degradaton – this has become a global pilot project. But Professor Paul Olav Vedeld says the strategy of payment for non-deforestation can easily hit the poorest. 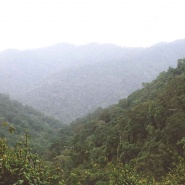 Photo: Pl Olav Vedeld
The Norwegian government envisages a triple dividend by using up to NOK 3 billion a year for 5 years to reduce deforestation, primarily in Brasil and Tanzania. This will result in less greenhouse gas emissions, and give a positive impact on biodiversity and sustainable development, including poverty reduction*.

Professor Paul Olav Vedeld at the Norwegian University of Life Sciences (UMB) has conducted a considerable amount of research into poor peoples’ dependence on the environment, including a widely used report issued by the World Bank.

The studies by Vedeld and other researchers have renewed relevance following the attention on climate initiatives using the tools Reduced Emissions from Deforestation and Degradation (REDD) and Payment for Environmental Services (PES). These seem to be the umbrellas that Norway intends to use for its forest billions.

Forest resources even up income
Vedeld does not believe that using onesided market mechanisms such as PES - payment for letting the forest stand unused - will be an unconditional success.

”One sees that agricultural development and conservation projects often lead to people being excluded from the areas and resources they have traditionally used. We must be clear that income from the forest and the environment are most important to the poorest and that this levels out incomes in local communities”, says Vedeld.

He points out that in practice it is imposible to control in detail PES payments in local communities. Pilot projects have also shown varied results. ”One particular danger is that land that is currently let or borrowed free by the poorest in the villages is used for PES projects instead. This denies the poorest access to food and important income possibilities”, says the professor in environment and development studies.

He believes it is best to use the experiences from market systems such as PES and microfinancing more critically and chose a suitable policy in each case. ”We must assess where it will be suitable to use market mechanisms. An alternative can often be to strengthen civic forest and natural resources mangement, emphasising good management systems, local control and communal division of rights.

Poor countries have protected more areas
A review of 54 studies from 17 countries that Vedeld and other researchers have made show that income from the forest is on average 22% of the total incomes. The less the household has, the more important forest resources are - often they are the most important.

A fact that is little known in Norway is relevant here: poor countries have already protected more productive areas than Europe has.

”About 1/3 of the area in Tanzania was protected from before and much of this consists of high productivity areas. If Norway puts considerable funding into this project, even less will be left for the poor” says Vedeld.

Protection processes have often been untidy and undemocratic. Many conflicts have arisen from protected areas, with resulting large losses of land areas and access to resources. Protected areas also give increased costs from loss of yields and animals as a result of increased wild animal stocks.

Can increase local conflicts
Paul Vedeld maintains that the basic focus in many PES schemes is lacking. ”They often take as a starting point the introduction of individual contracts and payment systems in communities where civic institutions, economic systems, access and rights to resources are often collective and undefined and are continuously interpreted and negotiated.

”They base their belief on people as rational, individual persons who in most cases put their own needs or profit before the common ones. If this isn’t a dominating aspect of the actual community, the mechanisms will of course receive strong resistance both openly and covertly.

”PES mechanisms can therefore intensify local conflicts and lead to increased poverty for vulnerable groups. If used, the mechanisms should be developed in cooperation with the local population, adjusted to local conditions and followed up closely”, says Vedeld.

The Norwegian Government writes about its international climate and forest initiative:
”Millions of people live in the forests and depend on them for food, animal fodder, fuelwood and building materials. It is a major challange to find ways of ensuring that local communities, including indigenous peoples, can continue to harvest sustainably from the forests, or that alternative livelihoods or paths of economic development are open to them.”

The question is whether the choice of tools and policy takes these challenges seriously.

Together with Arild Angelsen, Espen Sjaastad and Gertrud Kobugabe Berg, Paul Olav Vedeld, Professor in environment and development studies, has written the widely used report published by the World Bank in 2004: ”Counting on the environment” on village people’s incomes from the environment. On the basis of these surveys, he has later contributed to several international journals. Recently, he and Assistant Professor Espen Sjaastad from UMB have published together a longer, feature article on the internationally renowed internet page of Encyclopedia of Earth on the poors’ dependence on the forest.

*See the Government of Norway’s International Climate and Forest Initiative