On May 28th  the University for Life Sciences celebrated  its 150-year anniversary by arranging an international conference MAT 2009 (FOOD 2009); an anniversary conference where His Majesty the King was among invited guests from home and abroad. 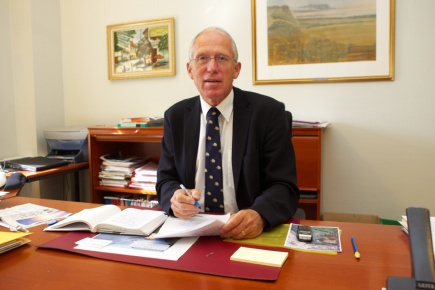 Rektor Kunt Hove, UMB. Rector Knut Hove expressed high expectations for the day Photo: Hkon Sparre
It gives me great pleasure to note that the conference is fully booked, as it  illustrates that food science,  one of many UMBs  priority academic subjects areas, is recognised as an exciting and academic  subject.

UMBs academic profile and values are emphasized also by the nomination of three new honorary doctorates during the anniversary  meeting Thursday afternoon.

The king
Knut Hove is grateful that the King has accepted the invitation to visit Ås and UMB this day.

- We are pleased that the King will participate in the anniversary dinner. The inhabitants of Ås and the UMB-employees and students, may greet the King when he arrives at the campus at six o clock this afternoon, Hove states.

Knut Hove is looking forward to share UBMs  knowledge and reflections about the challenges of food science in our time during the anniversary conference.

In the lead article of the new edition of the UMB-magazin  “UBM-nytt”  which is being issued on the day of the celebration, Knut Hove  shares some of his personal reflections on the development of the  former agricultural college “Den Høiere Landbrugsskole” that started with six teachers and 32 students in 1859, to the modern University UMB with 3150 students and almost 1000 employees.

His article will be published in English at this website with other selected articles from the magazine and videos from the conference.