Impacts of flooding in cities due to climate change

Studies show that projected climate change will cause increased flooding in Norwegian cities. Research on how to handle this challenge is carried out at IMT.

Impacts of flooding in cities due to climate change

Consequences of flooding in the cities

Intense rainfall results in very much run-off per unit area in a city. The water must be handled or transported away in a safe manner. As an example it may be mentioned that during the great flood in southeastern Norway in 1995, which was closer to a 500-year flood, the water ran-off, at most, from Glomma’s drainage area comprised of around 100 liters per second and km². In a city's central areas, it may drain off 10 000 l/s km², under a 10-year rain.

The impact of climate change on flooding in cities

Flood damages in the cities have increased dramatically in Norway in recent years. Insurance companies are working on a strategy to cope with expected and yet still increasing payments due to climate change. The companies will transfer more of the responsibility to the private property owner and the local authorities who are owners of drainage systems that is not tailored to climate change.

Data from Sweden and Denmark show that rainfall intensities caused by the intense rains can increase up to 50% above current levels. The rainfall intensities of strong rains in Denmark have already increased on average by approximately 20% just during the last 8 years.

Several studies in the UK show that the adverse effects of increased rainfall intensity and rising sea levels caused by climate change will be much larger than the actual cause would imply. It was found that a 40% increase in rainfall intensity would lead to an increase of 130% in the number of properties that are flood damaged, and an increase of 200% in the value of flood damage. 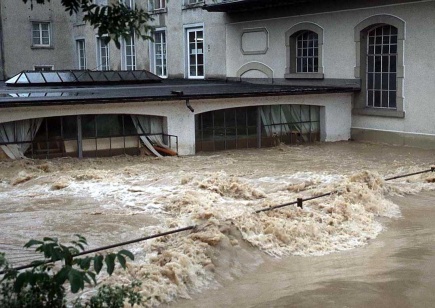 Flooding in the city Photo:

At IMT/NMBU, we have analyzed what the magnitude of major flood damage may be in Norwegian cities around 2070. Seven master degree projects at IMT provide analyses of the extent of flood damage and increased pollution emissions before and after the expected climate changes in several Norwegian cities.

It turns out that one can expect an increase in 50-100% in number of buildings that may be damaged by flooding with the expected climate at the end of the century, compared with the current climate. Pollution emissions in cities may increase from 50 to 100%. The figure below shows an example of a master degree project for Bergen. 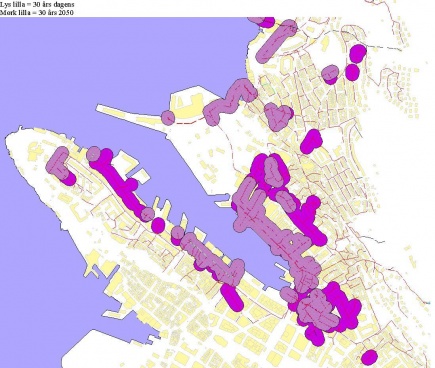 The cities' sewer systems were designed and built many years ago, and it did not anticipate the densification of surfaces that some cities have experienced and the increase in rainfall intensities due to climate change. Sewage networks have insufficient capacity for these increased loads, and they can not be adjusted and improved in a simple way.

The solution to this problem will include among others to make sure that not more surface water than today are directed to the drain networks. The surface water must be kept on the surface running through open channels and streams and ponds. Increasing the use of green roofs, infiltration through the lawns and the use of more vegetation are also among the solutions that are suggested.