Project on Diarrhea and Dengue in Laos and Thailand

Project leaders Hans Overgaard and Thor Axel Stenström, and PhD student Nsa Dada from IMT, UMB went to Vientiane, Laos in the beginning of March 2010 to arrange a project start up workshop for the so called DIADEN project.

Project on Diarrhea and Dengue in Laos and Thailand 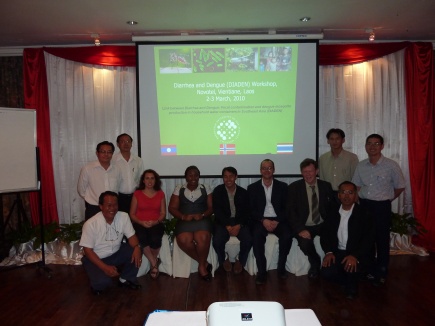 DIADEN is the short title of the project “Link between Diarrhea and Dengue: Fecal contamination and dengue mosquito production in household water containers in Southeast Asia”. The project is financed by the Research Council of Norway and IMT, UMB. Approximately 20 persons participated in the workshop who represented the partners of the project: the Ministry of Health in Laos; Vientiane Water Supply Company; Kasetsart University, Bangkok, Thailand and UMB. In addition participants were invited from Pramongkutklao Medical College in Bangkok, Thailand; Liverpool School of Tropical Medicine, UK;  and the World Health Organization (Laos). 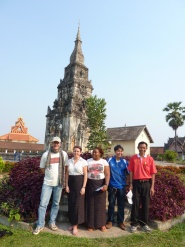 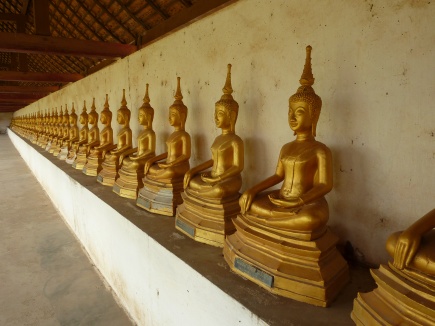 Objectives and outputs of workshop

The objectives of the workshop were to present and review the conceptual framework, hypotheses, objectives, outputs, strategies, activities, time schedules, and budget of the project; present updates on recent developments in the fields of dengue fever/mosquitoes and water management and water-related diseases (diarrhea) by invited speakers, present the status of dengue and diarrheal diseases in Thailand and Laos, discuss student projects, strengthen collaboration and improve interpersonal relationships between partners, plan and delegate responsibilities of partners. The expected outputs were to prepare a plan of activities for the project period 2010-2012, determine the responsibilities of partners, and make a preliminary selection of study sites in Laos and Thailand.

It was further decided to engage Mr. Nanthasane Vannavong (nickname Anan). Anan is a medical doctor from the National University of Laos and took his MSc in Tropical Medicine, Public Health and Epidemiology at Institute de la Francophonie, Vientiane, Laos. He is currently employed as epidemiologist in Champasak Provincial Health Office. Anan will start his PhD at UMB in April 2010, but will be based most of the time at Pramongkutklao Medical College in Bangkok, Thailand. 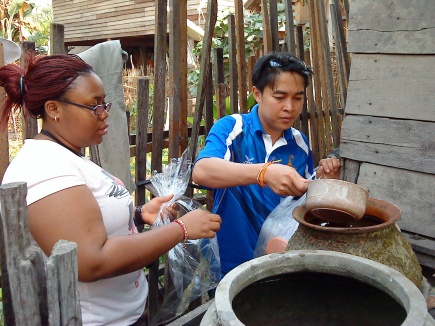 Based on the outcome of the workshop, two villages in each of two districts in Savannakhet province (Lahanam and Salakham villages in Songkhone district, and Phonsim and Oudomvilay in Kaysone district). Savannakhet province is located about 7 hours by bus south of Vientiane. Savannakhet town is located on the Mekong river. The purpose of the visit was to inform the provincial health office of our intensions, obtain consent and available data on dengue and diarrhea incidence in the province; get familiar with the village setting; observe the water management practices; identify different water containers; identify different water sources (improved and unimproved water sources); collect water samples for preliminary E. coli and coliform tests; and collect and identify mosquitoes from different containers. 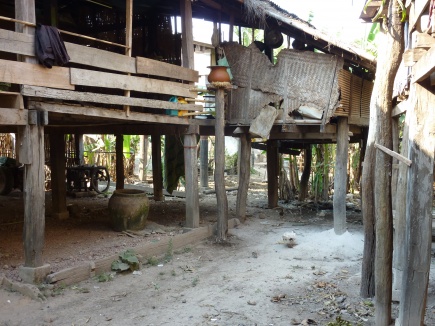 Different water containers and sources were observed – most of the containers found were round earthen/cement water jars for drinking and other household use, cubic bathroom tanks, and various other smaller containers lying around the compounds. Drinking water containers were mostly covered, placed indoors, and negative for mosquito pupae/larvae. However, two round jars were found outdoors without lids. Interestingly, pupae and larvae were found in the earthenware jar but not in the cement jar which raises a question of mosquito preference for earthenware containers. 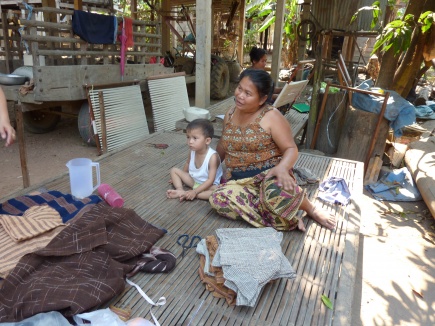 The different water sources observed include; personal wells (both protected and unprotected), protected public wells, public taps, boreholes, and bottled water from different water factories. Most of the households drank bottled water, while those who drank from the wells or taps fetched and transported water using jerry cans (with/without lids). Most of the households who didn’t use bottled water boiled their water before drinking, while very few did not – in such households, only the elder and/or sick people drank boiled water. Petrifilm test kits were used to test for the presence or absence of E. coli and coliforms in the different water samples collected. Preliminary results showed that three of the four drinking water samples collected were positive for both E. coli and coliforms. However, all four samples were positive for other bacteria whose colonies cannot be identified using Petrifilm. All four jars were earthenware, and held water collected from either a public tap or well.  Water samples collected directly from one public tap and one factory processed water container were also tested and found to be negative for E. coli, coliforms and other bacteria. However, since these tests were not carried out under standard laboratory conditions, the negative results cannot be justified.